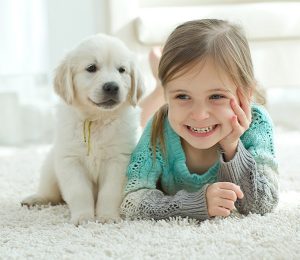 Cancer treatment in people could be transformed thanks to a study on treating cancer in animals led by researchers from the Ontario Veterinary College (OVC) at the University of Guelph. Their findings, published in the Journal of Immunology this June, are already leading to clinical trials to treat people with various forms of cancer.

The researchers found that injecting oncolytic viruses (viruses that target cancer cells) intravenously into the spleen boosts immune response faster and higher than traditional vaccine methods. Typically, physicians need to wait weeks or months to administer a booster vaccine, with the down time potentially deadly.

“Normally, you have to wait until the immune response is down to administer the booster vaccine, but this means that, with severe and dangerous diseases, the response would wane,” says Dr. Byram Bridle, lead author of the paper and a Pet Trust funded researcher whose projects aims to develop targeted biotherapies for the treatment of cancers, as well as using viruses that replicate and kill cancerous cells in the body.

“You don’t want to give cancer any time to spread. What injecting the viruses into the spleen does is it allows us to bypass the regulatory mechanism that would limit its effectiveness. When we conducted these tests in animals, we saw high success rates in treatment of cancer.”

He said the findings apply to many types of cancer, including breast cancer, leukemia, prostate cancer and osteosarcoma (bone cancer), and tumours in the brain, liver and skin.

“By getting the vaccine to this unique location in the body (the spleen), we were able to get an unprecedented immune response in minimal time,” says Bridle. “This is a fundamentally new way to treat cancer that bypasses many common side effects. These therapies are safer and more targeted.”

After bench research was completed, the team from Guelph and McMaster University conducted a clinical trial at OVC’s Mona Campbell Centre for Animal Cancer. Fifteen cats with mammary carcinomas, which is equivalent to breast cancer in humans, were treated as part of the study. In all cases, the cats had been diagnosed with mammary carcinoma by their referring veterinarian and were presented with the options of no treatment, standard of care only (surgery), or enrolling in the clinical trial.

Bridle says that since this was the first time testing a novel biotherapy in cats, an emphasis was placed on safety during treatment. “The cats tolerated the treatment very well. Typical side effects were limited to mild flu-like symptoms for a couple days post-treatment,” he says. “Importantly, the experimental portion of the therapy only required two immunizations, a dramatic difference from the intensive treatment regimens normally applied to cancer,” he adds.

The findings are already leading to clinical trials for people in Ottawa, Hamilton and Toronto.

Bridle says the study could help researchers in other fields, including those looking to treat virulent diseases such as dengue fever and Ebola. 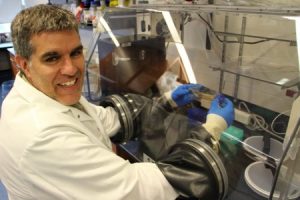 Dr. Byram Bridle is an Assistant Professor in the Department of Pathobiology at the Ontario Veterinary College, University of Guelph, and is a Pet Trust funded researcher.

“My research focuses on cancer, but certainly these findings would be applicable to other diseases. We just need to connect with people in those fields,” he adds.

He is optimistic that the human trials will help improve cancer treatment.

“We are living in a world where diseases seem to be growing faster than treatment, so we need to outpace them. Time is of the essence. It’s a race we have to win.”